Screen-Printed PERC solar cells are a promising candidate for next-generation industrial-type solar cells. Industrial PERC cell process flows typically involve wet chemical polishing of the rear side in order to reduce the surface roughness and to improve the conversion efficiency. In this paper, we show that Al2O3/SiNx passivation stacks achieve an excellent surface recombination velocity below 10 cm/s even for small polishing removal of 5 µm corresponding to rough surfaces. In contrast, SiOx/SiNy passivation stacks exhibit a strong increase of the surface
recombination velocity up to 30 cm/s for rough surfaces. Accordingly, we find that the efficiency of PERC solar cells with Al2O3/SiNx rear passivation is almost independent of the polishing etch depth with best efficiencies up to 19.7% for 7.5 µm polishing removal whereas the efficiency of SiOx/SiNy rear passivated PERC cells strongly decreases for rougher surfaces. 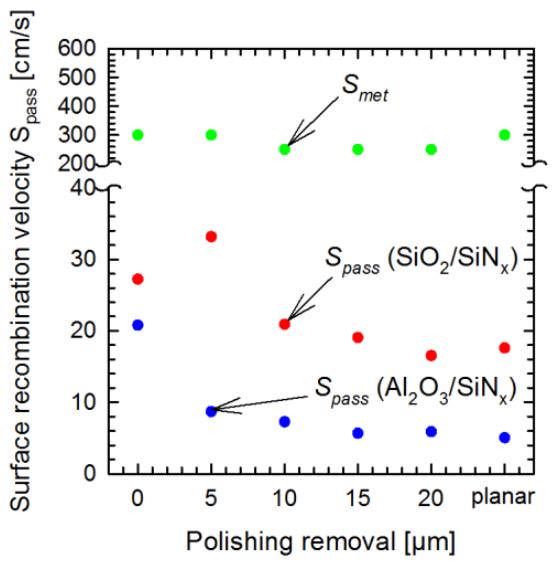 In this paper, we investigate the impact of the rear surface roughness on the surface recombination velocity and on the rear reflectance based on test wafers and PERC solar cells. We investigate the degree of polishing required for two different surface passivation layers, SiO2 /SiNx and Al2O3 /SiNx .

In order to analyse the impact of the surface roughness on the surface recombination velocity, we use 300 µm thick p-type boron-doped FZ wafers. After wafer cleaning and double sided alkaline texturing, we subsequently polish both sides of the FZ wafer using the RENA InPolish tool at ISFH. We vary the polishing time of the single sided wet chemical polishing process resulting in different silicon removals between 0 and 20 µm in order to obtain different surface roughness ranging from textured to planar. We compare two different passivation layer stacks. Either a stack of thermal SiO2 (10 nm thickness) and PECVD SiNx or alternatively atomic layer deposited (ALD) Al2O3 (10 nm thickness) with a PECVD SiNx capping layer. Finally, the wafers are fired in a conveyor belt furnace with a typical firing temperature profile. Afterwards, we measure the carrier lifetime by dynamic ILM [6, 7]. We prepare a second set of wafers where we locally open the rear passivation by laser contact openings (LCO) and then apply a full-area Al screen printing. After firing, we measure the lifetime by dynamic ILM. This methodology allows to determine the surface recombination velocity of the passivated areas Spass and the surface recombination velocity of the metallised areas Smet [8].As a reference we process wafers without texturing and wet chemical polishing. Thus the passivation layer is deposited directly after cleaning and damage etching on the FZ wafer. The surfaces of these wafers are termed planar. 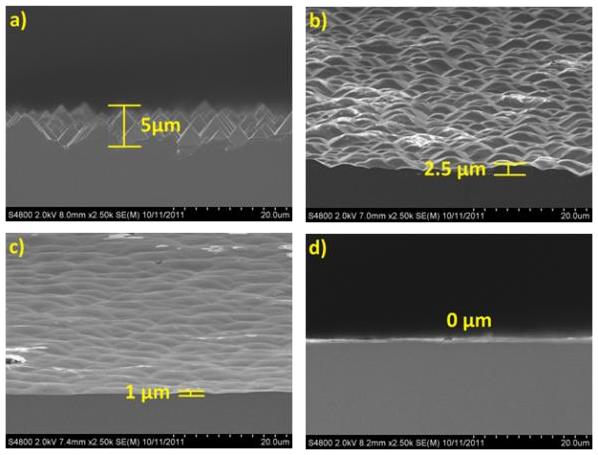 Figure 2: Schematic drawing of FZ wafers for lifetime measurements. Symmetrical test wafers of type a) are used to determine the surface recombination velocity (SRV) Spass. Wafers with rear metallization (type b) allow for determining the SRV in the passivated (Spass) as well as the metallised (Smet) areas.

Figure 2 shows schematic drawings of the test wafers resulting from the process flow as described above.

From the measured lifetimes on fully passivated wafers we calculate the upper limit of surface recombination velocities Spass = W/2*τeff as shown in Fig. 3. For SiO2 /SiNx passivation stacks, we observe a decrease from about 30 cm/s for textured wafers to values below 20 cm/s for the planar case. In contrast, the Spass values of Al2O3 /SiNx improve to below 10 cm/s already for small polishing removals of 5 µm. Fig. 3 shows the results for partly metallised and partly Al2O3 /SiNx passivated wafers according to Figure 2b). The SRV of the local screen-printed Al contacts, Smet, is independent of the rear surface roughness and remains constant at values around 300 cm/s. This result is confirmed by SEM cross sections which show that the Al back surface field (BSF) thickness is independent of the polishing removal. The SRV at passivated areas Spass fits well to the results of fully passivated wafers and are therefore not explicitly shown.

3 IMPACT OF THE REAR SURFACE ROUGHNESS ON PERC SOLAR CELLS 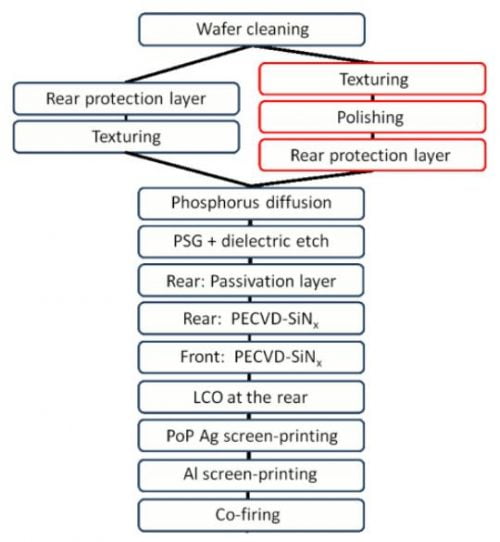 The blue process flow refers to the reference PERC process flow applying a planar rear side [9]. The red process steps describe the modified process flow applying the wet chemical polishing process at the wafer rear after double sided texturing. We start PERC cell processing with wafer cleaning and a KOH damage etch. Aiming at a final wafer thickness of 150 µm the time of the KOH damage etch step is adjusted for the different rear side polishing removals. After texturing, the RENA InPolish tool is used to polish the rear surfaces of the wafers. Variation of polishing time results in different Si removals between 0 µm and 20.9 µm. Therefore, the surface roughness corresponds to those of the wafers shown in Fig. 1. Afterwards, a rear protection layer is applied in order to allow a front side phosphorus diffusion followed by a wet chemical etch which removes both, the PSG on the front and the protection layer on the rear. We then compare to different rear passivation stacks, thermal SiO2 /SiNx and ALD Al2O3 /SiNx . In case of the SiO2 /SiNx stack we oxidize the wafers resulting in a 10 nm thin thermal SiO2 on both wafer surfaces followed by a PECVD SiNx capping layer on the rear. In case of the Al2O3 /SiNx stack, we deposited a 10 nm thin plasma-assisted ALD Al2O3 layer on the wafer rear followed by a PECVD SiNx capping layer. Afterwards, we deposit a SiN antireflective coating on the front surface. Local line openings are then formed by LCO. Using a Print on Print (PoP) screen printing process, we obtain Ag front fingers with a width of 70 µm. The aluminium rear contact is formed by full area Al screen printing. After each screen printing step, the pastes are dried. The process flow is completed by a firing step in a conveyor belt furnace. A schematic drawing of the resulting PERC solar cell is shown in Fig. 5.

The measured IV parameters of the PERC solar cells in dependence of the polishing removal are shown in Fig. 6. The reference PERC cells with planar rear side are displayed as well. The conversion efficiency η of SiO2 /SiNx passivated cells shows a strong dependence of the rear surface roughness. Moving from a textured to a planar rear side we observe an increase from 18.0 % to 19.2 % which is primarily caused by a strong increase of the short circuit current Jsc. In contrast, Al2O3 /SiNx passivated cells reveal only slight variations in the efficiency η around 19.5% for different rear surface roughness. The best efficiency of 19.7% was achieved by using a polishing removal of 7.5 µm. Also, the Jsc shows only a small improvement with increasing polishing removal. With respect to the open circuit voltage Voc, applying polishing removals of 5-10 µm leads to improvements of about 5 mV for both, SiO2 /SiNx and Al2O3 /SiNx rear passivation. In terms of fill factor FF the two passivation layer stacks show a rather contrary behavior. While there seems to be an increase from 76.4% to 78.0 % with increasing polishing removal for SiO2 /SiNx , the fill factor decreases from 78.8 % to 77.1% for Al2O3 /SiNx . Further investigations have to prove if the FF variations are systematic or not.

Figure 5: Schematic drawing of the SiO2 /SiNx rear-passivated PERC solar cell applied in this study. Note that in case of the Al2O3 /SiNx passivated PERC cells there is no thermal SiO2 between the emitter and the SiN AR coating. 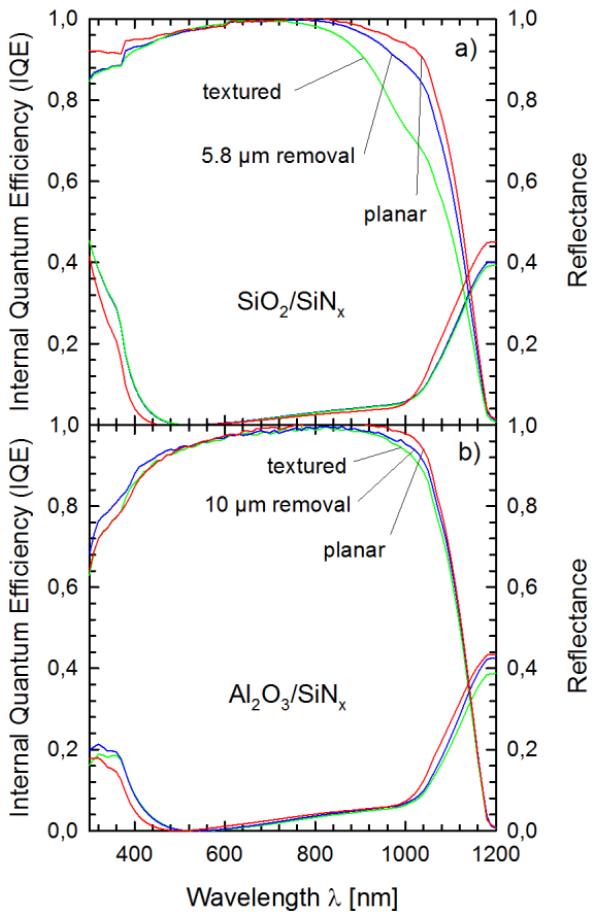 Figure 7: Internal quantum efficiency (IQE) and Reflectance for cells with SiO2 (a) and Al2O3 (b) passivation and rear surface roughness as indicated. 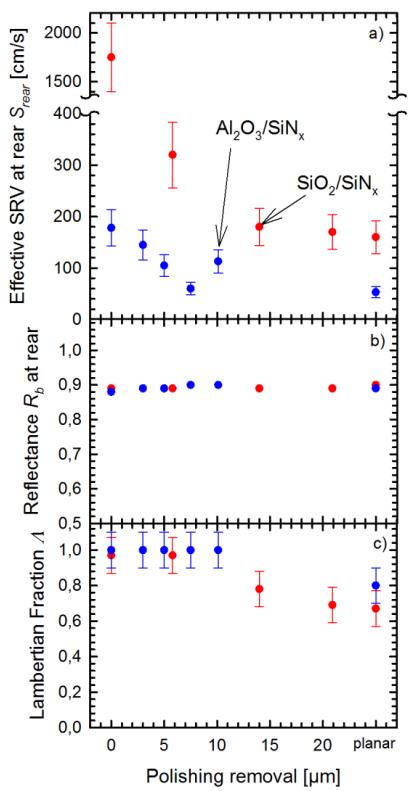 Figure 8: (a) shows the Srear values extracted from IQE measurements. (b) shows the reflectance of the rear surface Rb and (c) the Lambertian fraction Λ. All values are presented for Al2O3 /SiNx (blue) and SiO2 /SiNx (red) passivation and for different polishing removals.

Using the software Lassie from pv-tools, which is based on the analytical model for the QE introduced by [10], we analyze the reflectance and IQE to obtain the internal reflectance at the rear Rb , the Lambertian fraction Λ indicating the diffuse part of the rear reflectance and the effective rear surface recombination velocity Srear as presented in Fig. 8a. Rb is independent of the polishing removal with values around 0.9, whereas the diffuse part of the reflection Λ increases for rougher surfaces (see Fig. 8b and 8c). The rear SRV Srear of the SiO2 /SiNx passivated PERC cells strongly increases from about 160 cm/s for planar surfaces up to over 1750 cm/s for the textured rear whereas for Al2O3 /SiNx passivated PERC cells we only find a moderate increase of Srear with increasing surface roughness. The IQE analysis clearly shows that the advantage of Al2O3 /SiNx passivation results from electronic properties and not from optical ones.