Atomic layer deposition (ALD) of thin Al2O3 (≤10 nm) films is used to improve the rear surface passivation of large-area screen-printed p-type Si passivated emitter and rear cells (PERC). A blister-free stack of Al2O3/SiOx/SiNx is developed, leading to an improved back reflection and a rear recombination current (J0,rear) of 92±6 fA/cm2. The Al2O3/SiOx/SiNx stack is blister-free if a 700C anneal in N2 is performed after the Al2O3 deposition and prior to the SiOx /SiNx capping. A clear relationship between blistering density and lower open-circuit voltage (VOC) due to increased rear contacting area is shown. In case of the blister-free Al2O3/SiOx/SiNx rear surface passivation stack, an average cell efficiency of 19.0% is reached and independently confirmed by FhG-ISE CalLab. Compared with SiOx/SiNx-passivated PERC, there is an obvious gain in VOC and short-circuit current (JSC) of 5 mV and 0.2 mA/cm2, respectively, thanks to improved rear surface passivation and rear internal reflection. 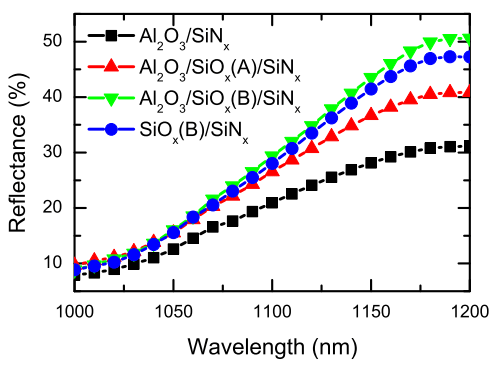 The present photovoltaic (PV) market is dominated bycrystalline Si solar cells. Its cumulative level of capacityannounced in 2009 was 24 GW, and the European PVIndustry Association expects these announced capacitiesto grow by about 30% in 2010. Thereafter, the compoundannual growth rate will level off to about 20% during lateryears to exceed 65 GW in 2014 [1]. As can be seen, it isgenerally expected that the Si dominance in the PV marketwill continue for at least the next decade.

As published in the International Technology Roadmap for Photovoltaics (ITRPV) following the historicallearning curve as well as industry growth, the specificcosts per watt peak (Wp) of Si PV modules are expectedto decrease by 8–12% per year. According to the Crystalline Silicon PV Technology and Manufacturing (CTM)Group, this implies a more effective use of material, moreproductive manufacturing equipment and more advancedprocesses [2].

For the required cost reductions to be achieved, solarcell recombination losses at the rear side of the crystallineSi bulk material must be reduced using relevant industrialprocesses. The CTM Group estimates that a J0,rear below100 fA/cm2is needed after 2015.

Screen-printed large-area p-type Si PERC-type solar cells are made following the process sequence listed in Table I. The cells are made using the same Cz Si solar grade material mentioned previously, are 150-mm thick and have a 60 Ω/sq emitter.

Table I. Baseline p-type Cz Si passivated emitter and rear cell (PERC)-type solar cells, having an (Al2O3)/SiOx /SiNx rear surface passivation stack. The 148.25-cm2 cells are 150-mm thick, have a base resistivity of 1 Ω cm and an emitter of 60 Ω/sq.

The Seff,pass is estimated from teff by applying a lifetime tester (Sinton WCT-100, Sinton Instruments, Boulder, CO, USA) and using Equation (2), with tbulk as the bulk lifetime and W as the c-Si wafer thickness. The tbulk is estimated by passivating various thicknesses of equivalent Cz Si material (700-mm-thick p-type CZ Si wafers are thinned down during the NaOH : H2O etching step). Hence, a plot of inverse effective lifetime as a function of inverse wafer thickness leads to an estimation of tbulk, which is the intercept of the linear fifit with the 1/teff-axis as can be seen from Equation (2). For the Si material used in this work, the tbulk is calculated to be 714 ± 76 ms at 1 1014/cm3 injection level.

The Seff,metal is estimated using quasi-steady-state photoconductance-calibrated photoluminescence (QSSPC-PL; BT Imaging, Surry Hills, NSW, Australia), which is needed to be able to measure the teff of samples that are partially laser ablated and metalized. Consequently, a plot of the Seff,rear as a function of metalized fraction (X) gives an estimation of Seff,metal that can be calculated from the slope of the linear fifit as shown by Equation (3). Varying the pitch of the local point contacts, the Seff,metal is estimated to be 1726± 74 cm/s for the Al sputtering used as rear metalization in this work.

Finally, the Seff,rear is calculated by employing Equation (4), with the Seff,pass estimated from measuring teff at 1 1014/cm3 injection level (using 714 ms as tbulk in Equation (2)), Seff,metal equal to 1726 cm/s, X equal to 0.0147 as typical laser ablated fraction in this work, Y is the blistering surface coverage as measured with optical microscopy and Z is the fraction of blistering contacted during co-fifiring, as explained in Section 3.2.

Figure 1 compares the reflflectance between 1000 and 1200 nm of PERC-type solar cells on p-type Cz Si substrates with alkaline-textured front surface and polished rear surface passivated by a stack of Al2O3 /SiNx , SiOx / SiNx or Al2O3 /SiOx /SiNx . For the SiOx layer, two thicknesses have been used, where SiOx (A) is thinner compared with SiOx (B). From these reflflectance measurements, it is clear that for optimal rear internal reflflection of an Al2O3 – based rear surface passivation, it has to be capped with a thick-enough SiOx layer and SiNx . These rear surface passivation stacks have been optimized in previous work (see [16] for more details).

This means that for optimal rear internal reflflection, the Al2O3 has to be capped with SiOx /SiNx before the co-fifiring step (Table I). As explained in [17], capping a thin ALD Al2O3 fifilm with SiOx and/or SiNx or annealing a stack of Al2O3 and SiOx and/or SiNx can lead to blister formation. Blistering is the partial delamination of an Al2O3-based stack caused by gaseous desorption in the Al2O3 layer upon thermal treatments above a critical temperature (typically 350 C for ALD Al2O3); the capped Al2O3 layer acts as a gas barrier and blister formation occurs. Blistering of Al2O3 and capped Al2O3 layers has been observed for various deposition techniques: thermal ALD [17], plasmaenhanced ALD [18] and PECVD [19,20]. Using a thinenough (≤10 nm) Al2O3 layer and performing an annealing step prior to capping are shown to be the solution to create blister-free Al2O3-based passivation stacks.

Figure 1. Reflflectance at high wavelength for passivated emitter and rear cell-type cells having a rear surface passivation stack as indicated. For the SiOx layer, two thicknesses have been used, where SiOx(A) is thinner compared with SiOx(B).

Blister-free screen-printed large-area p-type Si PERC-type solar cells are made as indicated in Table I, using an “out gassing” thermal treatment for 20 min in N2 after the Al2O3 deposition and prior to the SiOx /SiNx capping. Figure 2(a) shows the VOC of these cells as a function of the out-gassing temperature. Also the blistering surface coverage for the Al2O3 /SiOx /SiNx stack is shown, as measured by optical microscopy. As a reference, the VOC of SiOx /SiNx -passivated PERC is also given. Figure 2(b) gives the Seff,rear as calculated using Equation (4), with Y as the blistering surface coverage shown in Figure 2(a) and Z as the fraction of blistering contacted during co-fifiring. Using the simulation approach explained in the aforementioned experimental part, the VOC depicted in Figure 2(c) is simulated from the Seff,rear values shown in Figure 2(b). The Seff,rear and VOC in Figure 2(b) and (c) are calculated as a function of out-gassing temperature as well. 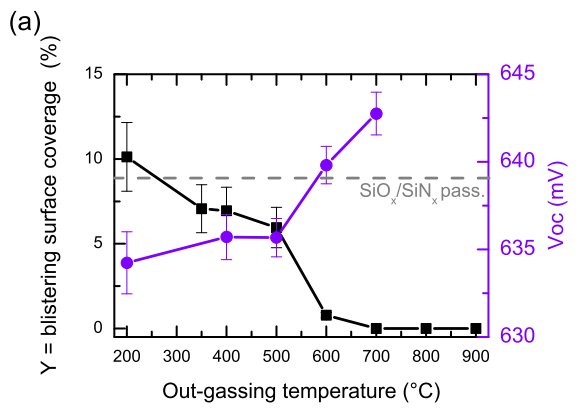 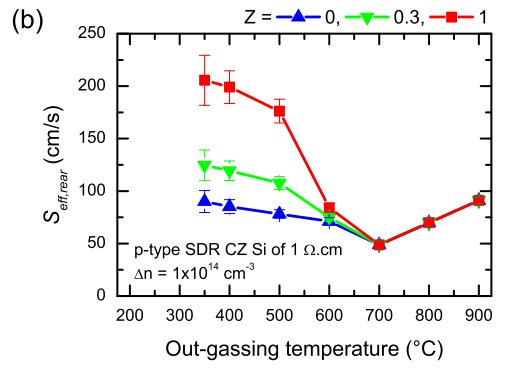 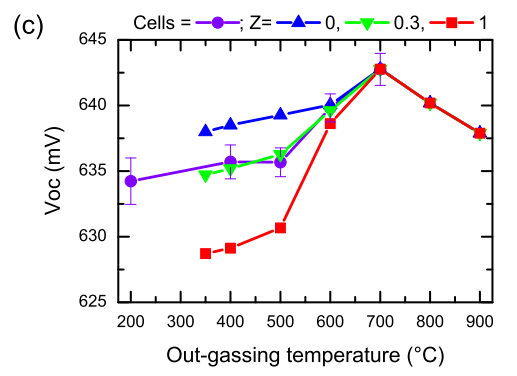 Figure 2. (a) Total blistered area and average VOC for Al2O3/SiOx/ SiNx rear passivated p-type Cz Si passivated emitter and rear celltype solar cells. The 10-nm Al2O3 layer has been out-gassed before the SiOx/SiNx capping by using temperatures shown on the horizontal axis. (b) Calculated Seff,rear as a function of out-gassing temperature. Seff,rear is estimated using Equation (4) and the blistering surface coverage shown in (a) as Y. (c) Simulated VOC using the Seff,rear depicted in (b) and the ideal one-diode equation (Equation (5)). Also the average measured VOC is shown.

Table II. Overview of the cell characterization results (AM 1.5 G) for the 148.25-cm2 (Al2O3)/SiOx/SiNx passivated p-type Cz Si PERC-type solar cells. The processing sequence is given in Table I. The cells are 150-mm thick and have a base resistivity of 1 Ω cm.

As seen in Table II, for Al2O3/SiOx /SiNx -passivated PERC-type solar cells, an optimum reaching an average cell effificiency of 19.0% is found and independently confifirmed by FhG-ISE CalLab (Figure 4), as compared with 18.7% for the best SiOx /SiNx -passivated solar cell. There is an obvious gain in VOC and JSC of 5 mV and 0.2 mA/cm2 , respectively, thanks to enhanced rear surface passivation and rear internal reflflection. This improved Al2O3 /SiOx /SiNx rear surface passivation is also confifirmed by the IQE measurements at wavelengths between 1000 and 1200 nm as shown in Figure 3. Using Equation (1), from the minimal Seff,rear depicted in Figure 2(b), a J0,rear of 92 ± 6 fA/cm2 is approximated for the Al2O3/SiOx /SiNx rear surface passivation, well in line with the ITRPV roadmap beyond 2015 [2]. 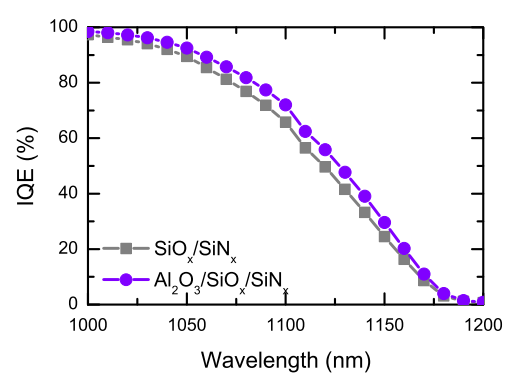 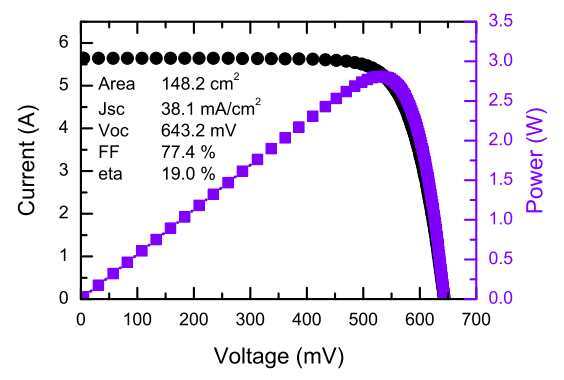 Figure 4. Current and power as a function of voltage for one of the Al2O3/SiOx/SiNx-passivated cells (Table II), as independently confifirmed by FhG-ISE CalLab.

In this work, an Al2O3/SiOx /SiNx rear surface passivation stack is developed for screen-printed large-area p-type Si PERC-type solar cells. An average cell effificiency of 19.0% is reached and independently confifirmed by FhG ISE CalLab. Compared with SiOx /SiNx -passivated cells,  there is an obvious gain in VOC and JSC of 5 mV and 0.2 mA/cm2 , respectively, thanks to improved rear surface passivation and rear internal reflflection.